Note: You can find a list of all the lore books in New World here. The below information is in "fan fiction" or "story form" for easy reading. This is meant to be an intro into the lore of New World. Hope you enjoy.

The waves are crashing violently around you and you wonder why you took this journey, then you remember. You have been drawn to this enigmatic world for the same legend that has led generations of explorers to the mystical shores of the island. Aeternum is an island unlike any other. It pulses with a strange life that can only be explained by the powerful substance that runs through it….Azoth.

Many believe that Azoth is the key to eternal life, and this substance has drawn both the pure of heart and the wicked to its shores. Azoth has the power to magnify all life forms around it, creating an unimaginable beauty in both the atmosphere of the Island and the creatures that live there. However, there is also a very dark side to this exotic substance that can have evil effects on the life forms it comes into contact with.

The brave adventures that washed up on the shores before you were endangered at every turn by a vicious element known as the corruption. The corruption corrupts life it comes into contact with, and has varying degrees of potency depending on the makeup of the host. Some are left as bestial husks, while others are exalted to incomprehensible power.

Your ship finally comes to a crashing halt as you wash up on the shores of Aeternum. You get out of the boat and look upon a land that is more beautiful than anything you have ever seen. You step out of the vessel onto the shores of Aeternum for the first time and try to soak in sheer beauty you’re witnessing. However, you quickly realize you’re not alone. You hear a screech and see a hideous creature running towards you. You make quick work of the monster, but the reality of your situation begins to set in. This place may be beautiful, but it’s definitely not safe. After a bit of exploration around the shores of Aeternum you encounter several more of the zombie-like creatures and begin to learn that these were once humans that died in some horrific way on the island, and are now stuck in this half-death state. These soulless wretches you now call the Lost.

You find a safe place near the beach to set up camp for the night in order to rest up for the explorations of the next day.

As the sun rises and you wake up your breath is taken away at the sheer beauty of your surroundings, so much so that you almost forget about the incredibly vicious Lost that you encountered the night before.

As you snap back into reality you begin to make a push inland. As you travel further away from the shore the ocean you were once so close to fades away and you find yourself traversing thick foliage still in search of the mystical substance Azoth.

In the distance you see what appears to be another person running for their life weaving around trees. Before you could shout to them you see some sort of humanoid creature plant an arrow in their back. They fall and the creature spots you.

You prepare for a battle, engage, and defeat the monstrosity. After further exploration you encounter many other varieties of the same creature and realize that nature is trying to imitate the form of humans or other creatures it sees. It’s like the island’s defense system. The natural powers of the island are rising up and fighting against the people who have come to corrupt it. You call these creatures the Angry Earth.

You continue to push inland hoping to find signs of another person so you can seek out answers to the many questions you already have in the short time you’ve been on Aeternum.

After some time you stumble upon a large settlement. You enter the settlement cautiously and learn that there are quite a few more people already living on the island.

Upon arriving you begin asking about the towering monoliths that you have seen in the distance. You learn that there once was an ancient civilization that inhabited Aeternum and harnessed the power of Azoth. They used it to power their technologies. Something happened to the ancients but no one knows what. The remnants of their past lay scattered all across the island.

During your time at the settlement you quickly make a few acquaintances and learn that everyone on the island isn’t as hospitable as some of the people you have met. There are several other settlements on Aeternum, and even a 3 way faction war brewing amongst the people.

Aeternum clearly isn’t what you were expecting when you began this journey to obtain the power that is harnessed within Azoth. You now understand that to get what you want you’re going to be here for a very long time. 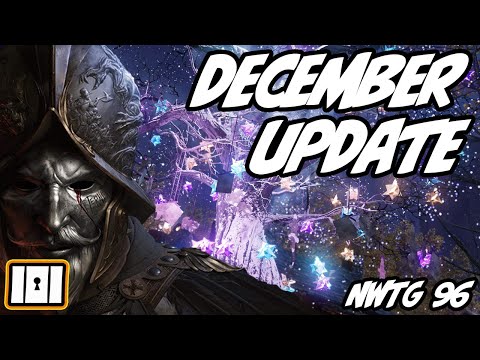 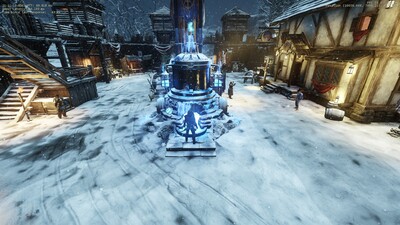