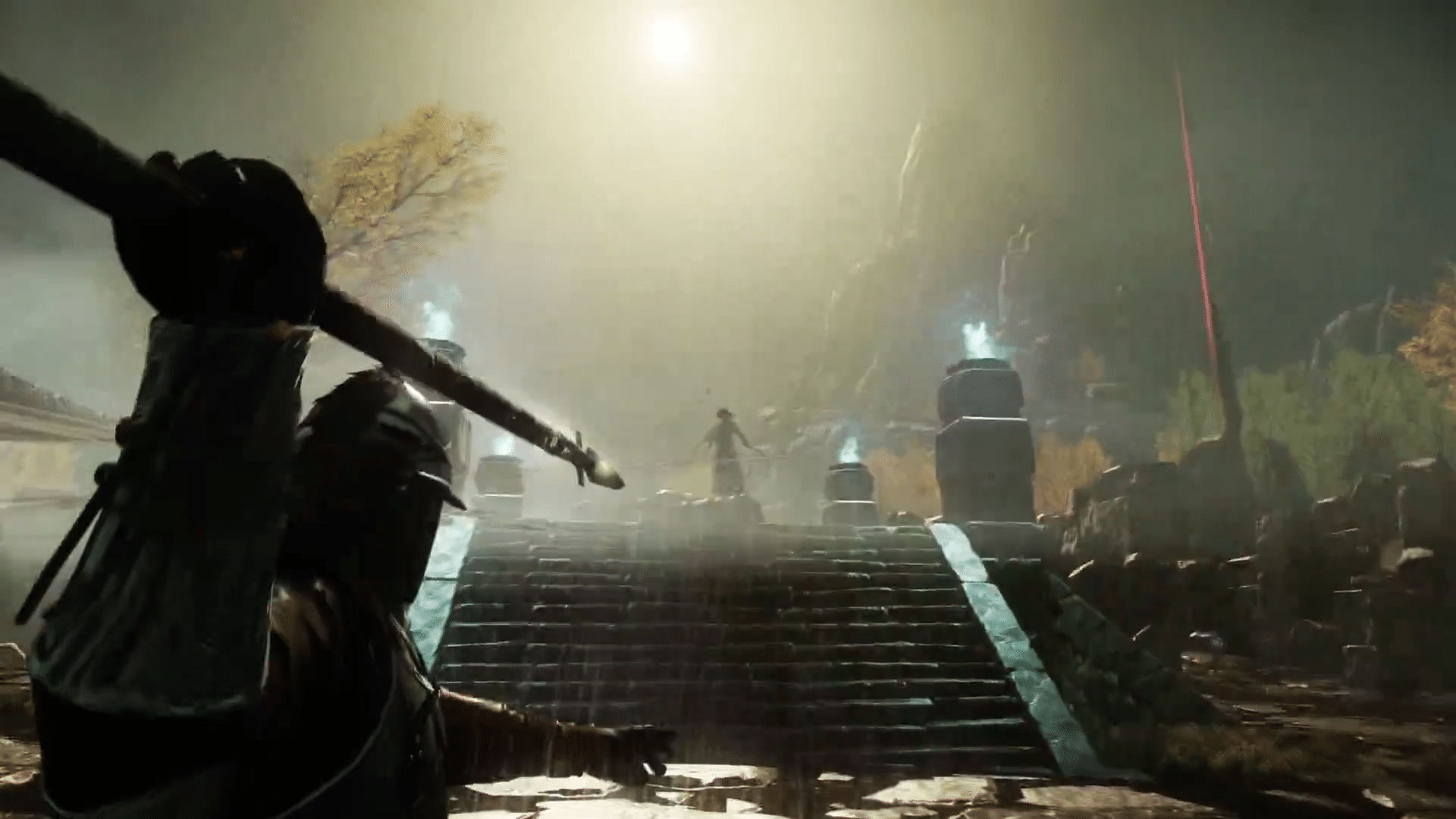 The spear is a Two-handed weapon that deals thrust damage.  Its damage scales off Dexterity primarily and has a secondary stat of strength.   The skill trees of the spear have a strong selection of both Crowd control and debuff abilities.  The spear also boasts the longest range of all melee weapons, giving some advantage in close-range combat.

For a complete list of changes for the Spear, you can check out our Spear change log.

The Spears Mastery Tree is broken down into two skill trees, the Zoner and the Impaler

The active abilities in the Zoner tree all have built-in CC and are centered around range and zone control.

Cyclone is an AOE ability that deals 130% weapon damage, knocks back targets in the area, and applies a 3-second slow.  Once Cyclone is fully upgraded, it gains grit and the ability to regain 25 stamina for each target hit.  This pairs well with the key passive in the tree, Reserved Strength

The second passive ability is Javelin, a ranged projectile ability that staggers your target and deals 125% weapon damage.  When upgraded, Javelin also knocks down your target and can reduce its own cooldown by 50% if you land a headshot.  The final upgrade to Javelin increases the damage dealt by 2.5% by every Meter the projectile travels, up to 100%.

Sweep is an AOE ability that knocks down all targets in the area and deals 75% weapon damage.  When upgraded, Sweep gains grit and a combo finisher called Coup de Grace that deals an extra 125% if activated.

Most of the passives in the Zoner Tree are centered around stamina preservation and improving your heavy attack. Deadly Consistency gives 10% increased damage on consecutive heavy attacks on the same target.  Refreshing Reach reduces all spear cooldowns by 15%. Defensive Stance grants 15% fortify for 2 seconds with a successful heavy attack.  One of the most potent passives is Merciless Strength, which deals 25% more damage to knocked-down targets. Strong Conditioning and Invigorating Crits help you keep your stamina pool full to more consistently take advantage of Reserved Strength.

The active abilities in the Impaler Tree are centered around applying DOTs and debuffs to your target.

Perforate deals three quick attacks at 80% weapon damage and applies rend decreasing your targets ability to mitigate damage by 5% for 10 seconds.  The first upgrade to Perforate is Rupturing Strikes which increases the rend debuff applied to your enemy by 10% for each strike of perforate landed as long as the target is above 50% health.  The final staggers your target if you land all three hits.

The next ability is Skewer allows you to rush forward dealing 125% weapon damage and applies a bleed that deals 20% weapon damage every one second for 10 seconds.  When upgraded, Skewer deals 20% increased damage against targets with full health and grants empower on critical hits increasing damage by 20% for 10 seconds. The bleed time also increases to 15 seconds from 10.

The final ability is Vault kick which will “vault” you forward, dealing 75% of weapon damage and applying a stun for 1.5 seconds.   When upgraded, Vault Kick can reduce the cooldown of your other spear abilities by 30% and grant you empower, increasing your damage by 20% for five seconds as long as you land Vault Kick on an enemy below 50%.  It is also worth noting that Vault Kick is a taunt gem compatible skill.

The passives in the Impaler Tree scale tree are centered around increased benefits from attacking enemies with debuffs and improving your light attack.  Refreshing Jabs decreases cooldowns for all spear abilities by 10% when you land the second attack in the spear’s light attack chain. Crippling Jabs applies a 30% slow on the last hit of your light attack chain to targets below 30% health.  Precise Jabs increase your crit chance in light attacks by 5%.  Exposed Wounds increase your Crit chance by 15% against targets with bleed applied to them.  Exacerbating Crits can help you take advantage of the increased crit chance as it extends the duration of all spear tree debuffs by 2 seconds on a critical strike.

Two passives in the skill tree stand alone but can greatly increase your DPS in certain situations.  Finishing Blows increase your damage by 15% against enemies with 30% health.  Unerring Precision gives you 20% increased damage against targets with active grit.

The key passive in the Impaler Tree is Exploit Weakness which increases your damage by 10% per each debuff on an enemy up to 30%.   In group play, there will be no problem keeping Exploit Weakness at most stacks since most weapons have at least one debuff that they can apply to a target within their standard rotation.

The spear is primarily a DPS weapon and comes with one of the best DPS-oriented key passive ability in New World called Exploit Weakness. It also has a solid role in group play with Perforate that applies a 30% rend to targets and is relatively easy to keep active.   The spear also excels in PVP with its access to several CC abilities with good cooldown reduction.

As DPS, your rotation is focused on keeping rend and 3 stacks of bleed on your target at all times.  Between Skewer and Vault kick, you should be able to keep empower on yourself at all times as well.  Distance and positioning are also important with Deadly Reach, which increases your crit chance by 10% against targets that are 3 meters away. Exposed Wounds also increases your crit chance by 15% against bleeding enemies.  Since the Spear comes with a built-in 5% crit chance, you should have no problem keeping your crit chance around 30% on your target at all times. This should allow you to proc Exacerbating Crits on your target, which extends spear-based debuffs on targets by 2 seconds.   Refreshing Jabs and Precise Jabs will help your light attacks simultaneously re-apply your buffs and reduce the cooldown of your next ability.

Perforate is an extremely powerful group ability that will make every group have at least one spear user.   An important thing to remember is to reapply rend before the target drops below 50% health to get the full 30% rend, as it drops to 15% if applied on targets below 50%

The name of the game in Spear PVP is Crowd Control.  Vault Kick and Perforate should be used to keep your target reeling and weakened to incoming damage.  Vault Kick also greatly reduces the cooldown of your other abilities, making it easier to chain attacks and maintain CC.  The only thing that should prevent you from doing this is if your enemy has active grit.   With Unerring Precision, your enemy’s greatest strength against you will become a weakness as it allows you to deal 20% more damage to targets with active Grit.

The third active ability for PVP should be Skewer or Sweep.   If you’re having increased difficulty keeping your target stun/staggered, Sweep can make it easier to keep your opponent under the influence of CC.   By choosing Sweep,  you lose access to a significant amount of damage.  Skewer deals decent damage on its own and allows you to keep 3 stacks of bleed on a target and helps the user stay empowered.  If you don’t choose Skewer, you also lose out on Exposed Wounds, which increase your crit chance on bleeding targets by 15%.

Recommended Weapon Pairings with the Spear

The Spear scales off of Dexterity, so pairing the Spear with another weapon that scales off Dexterity is recommended.

You can reference our builds section for specific Spear pairings and builds that other players in the community are using.

How to Level the Spear in New World

As with all weapons, AoE is your friend when it comes to getting those quick levels. Sweep will be your main AoE ability followed up with Cyclone. The problem with Cyclone however, is that will knock back pushing monsters out of AoE. Ideally you would only use Cyclone while doing the AoE grind solo. While with a party you will want to use Sweep and then use your light attack. For locations check out our Weapon Leveling Location guide.

The Ability perks for the Spear in New World are as follows:

The type of gem you  will want to slot into your Spear is heavily dependent upon your build and what you’re trying to accomplish. If you are running as a DPS you might prefer a gem for damage to those thrust is weak against. This will depend on what your second weapon is, for example you wouldn’t take a Ruby if you are using a fire staff as secondary. (You can check our quick reference guide for gems for a full list of gems and their effects).

Enemy types the Spear is strong/weak against

With a Spear the damage type you will be dealing is Thrust. Our Damage Type vs Mob Types Quick Chart guide as a complete breakdown for every weapon.  Corrupted and Beasts will be the monsters most affected by this and is ideal to use against them. Angry Earth and The Lost are resistant to Thrust.

That Concludes our New World Spear Guide. For more on where to level your Spear, check out our Weapon Leveling Locations.