New World released an official piece of news today on newworld.com clearing up their vision for the end game cash shop and MTX features.  This included the clarification that all cash shop items will be only cosmetic at launch including outfits, weapon skins, and dyes.  They added an example of both end game gear and store gear to show that their would be "exceptional"  looking gear found in both places

They also stated that you would be able to find housing items, guild crests and emotes in the cash shop as well.  More importantly they went on to state that they fully intended to make sure that no future additions to the cash shop will not prevent players from having an "even playing field" when it comes to progression and gameplay.  They continued to ensure that if they added anything to speed up the leveling process, it would be much later and would take in to account player feedback and sentiment on how it should be implemented.

You can find the full article here.

New World dev's Also recently responded to comments concerning microtransactions and other monetization strategies in the New World Steam discussions.  Here is a list from reddit on what we know so far!


We are very actively reading feedback. We understand folks are worried about Pay2Win items being placed in the shop.For any MMO player this is a very real concern, and we have not yet earned player trust until we've been live for some time. The best way we know to approach this is to show you, by not doing that. It is not in any way our goal or plans to make players feel like they have to participate in the store in order to play at even the most competitive levels.A lot of of the harshest criticisms I have seen are things we won't be doing, so we just have to show through our actions. We aren't creating problems to sell solutions, we don't want people to skip content, we aren't selling cooler cosmetics than can be earned in game, and won't be doing any of the other things folks are afraid of.

There are a few reasons people are super upset.In part, you are correct, it is because they are excited about New World and passion turns to fury in a flash. Another part of it is that the financial component to the games business is unclear to customers and has been since the variety of ways to fund game development and support have changed and expanded, leaving a lot of customers confused and frustrated. There are a lot of game models and an even wider variety of payment models.When New World was a smaller game, we picked what we felt was a very fair, low market price that allowed the most number of players to enjoy the game as possible. As it became larger in scope we didn’t want to increase the price, so we looked for alternate, optional ways for players to help support its scope and to continue our pace of introducing new content in live.Video games are in the business of joy. Sometimes the business stuff isn't very fun to talk about. But launch is just the beginning for New World and we want this to be a game folks will love for a long time, this means continuous support and development post launch. This also mean generating funding beyond the $40 one time purchase.

A storefront of optional cosmetics and rested xp boosts is not an aggressive monetization tactic and when paired with a $40 upfront price don't begin to touch on the various ways games monetize or the more predatory practices you can find out there like paywalls, cooldown timers, etc.I understand folks have fears, that these things can be a gateway to abuse but we're committed to ensuring fairness and value in our shop.

So, you're adding rested XP boost?

Yes, months after release we may be adding rested XP boosts to our store. At launch, and for months following we will only be selling cosmetics but we want to be clear that we may sell rested xp boosts in the future.

We will not be selling resources in the New World shop. Our plans are for cosmetics and, several months after launch, rested XP boosts.


Update:  Ser Medieval has a video premier covering a recent interview of some members of the New World team, also covering microtransactions! 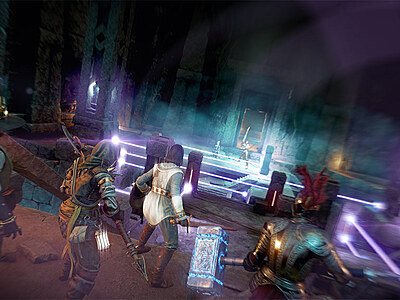