The Ice Gauntlet is an intelligence based weapon that allows the wielder to cast ice spells as well as attack at range. It has many crowd control abilities and has a ton of area denial abilities. Light attack deals 100% ice damage and a heavy attack deals 140% ice damage.

The Ice Gauntlet in New World uses mana when using light attacks, heavy attacks, and abilities. For instance, the Light attacks cost 2 mana and Heavy attacks cost 5 mana. Mana does not regenerate while you are attacking. There are ways to manage your mana, and there are mana potions that can be consumed to recover mana quickly.

The two skill trees for the Ice Gauntlet are the Ice Tempest and Builder skill trees.

The active abilities in the Ice Tempest tree are centered around AOE damage and has a powerful Key Passive in Ultimate Chill. These abilities are all focused on denial for monsters and players alike.

Ice Spikes (10s CD | 15 MP) is a cleave ability with a tied-in skill shot called Mighty Strike. It has a range of 8 meters but the player can end it, proc-ing Mighty Spike at any time causing additional weapon damage and a pushback

Refreshing Spikes (1st) reduces the [CD]Cool Down for Ice Spikes by 10% if the player successfully performs the skill shot by hitting a target with Mighty Strike. Empowered Spikes (2nd) increases the damage of Mighty Strike by 20% if the target’s health is below 30%. Deadly Path the third passive which increases the default attack of the ability by 10% (Mighty Strike doesn’t change) and adds a stagger to this ability. Spikey Reach (3rd) creates additional ice shards fire on both sides of the Mighty Strike enabling you to hit a wider area. Each shard has a 6-meter range and deals additional weapon damage.

Ice Storm (20s CD | 25 MP) creates a 5-meter radius ice storm at the selected target area that deals weapon damage over 5 seconds every 1/3 a second. In addition, the affected area also creates a frosted area that will slow movement speed by 25% (This effect doesn’t apply to friendly/self targets).

Wind Chill (15s CD | 20 MP) is the Ice Gauntlet’s version of the Flame Thrower, but with a limited channel time and a few other things. Further, it creates a column of ice wind that is 7 meters long. If hit by the ability it will push back the target 5 meters and deal small weapon damage. The last 2 meters of the ability has an increased damage modifier and doesn’t push back. Finally, you are able to move while channeling this ability.

The Key Passive in the Ice Tempest Tree is Ultimate Chill. Ultimate Chill grants a 25% increased damage buff against targets that have been hit with an Ice ability. This buff lasts 3 seconds but can be reapplied with any of the Ice gauntlets abilities. This is an extremely strong DPS passive and the most likely choice for most Ice Gauntlet users.

The Active abilities in the Builder tree have a lot of utility and survivability for the user.

Ice Pylon (10s CD | 15 MP) is an ability that you place in front of your character that spawns a little ice tower that will auto-attack enemies within 20 meters of it for medium weapon damage. Additionally, the pylon will add a 1-meter circle of frost that slows. The Pylon lasts for 15 seconds unless the pylon is destroyed.

Greater Pylon (1st) increases the damage against slowed targets by 10%. Pylon Regen (2nd) causes the Pylon to fully heal after 5 seconds of not taking any damage. Pylon Dodge (3rd) increases the rate of fire for 3 seconds after you dodge. Pylon Refresh (4th) a successful hit from the pylon extends the lifetime of the pylon for 1 second up to 45 seconds. Ultimate Frost (5th & Key Passive) doubles the pylon’s health and extends the frost circle to 5 meters. Standing in the frost circle doubles the effects of Quick Frost (Passive Movement Speed) and Empowered Frost (Passive Mana Regen).

Ice Shower (30s CD) is an ability that summons a 1 meter wide by 5 meter AoE Ice-like-wall that lasts for 4 seconds and that applies a powerful debuff to enemies that come into contact called Frostbite. This debuff will cause a few different affects; the first one is that it will root the affected player in place for 1 second, secondly, it will prevent the player from being able to sprit or dodge for 3 seconds, and thirdly it applies a 50% reduction of speed that lasts 3 seconds. The 3-second timer starts after the player leaves the effected area of Ice Shower while the 1-second root will only 1 second after initial contact.

Enduring Shower is the first passive upgrade. This passive upgrades Ice Shower’s 4-second timer to be a 7-second timer making it over double the denial time while active. Next is Quick Shower. This passive applies haste, 25% movement speed, buff to self and allies that walk through the Ice Shower for 2 seconds. Frigid Showers is the third and final upgrade. The passive adds an addition effect with Frostbite called Rend. Rend decreases the target’s armor by 10%.

Strengthen Tomb is the first passive. It increases the player’s defense by 25% for 3 seconds after exiting the ice barrier. Finally, is Cleansing Tomb that cleanses all debuffs when Entombed is activated.

The other passives in the Builder Mastery Tree are centered around Defense, movement speed, and cool down reduction

The Ice Gauntlet is currently used in DPS builds for both PVP and PVE. In Wars, the Ice gauntlet is most commonly found in a Support build and is paired with the Void Gauntlet.

The following weapons are recommended pairings for the Ice Gauntlet in New World.

You can reference our builds section for specific Ice Gauntlet pairings and builds that other players in the community are using.

How to Level the Ice Gauntlet in New World

In order to effectively level the Ice Gauntlet, it’s recommended to take abilities that do high Area of Effect damage. This will allow you to group mobs together and quickly kill them for a faster leveling experience. Below is the best way to spend your Mastery Points as you level the Ice Gauntlet.

Once you have these for perks, taking down large groups of mobs should be simple. First, pull mobs with your light attack and kite them around until you have them grouped up. Next, Cast Ice Storm on the group of mobs, Followed by an Ice Shower. This Ice Shower should be used to keep the mobs in Ice Storm for as long as possible. Finally, while the mobs are immobilized in Ice Shower, Use Ice Spike for burse AOE damage and use your light attacks to finish them off. Here is how to spend the Rest of your Mastery points to increase the damage of the combo and speed up leveling

The type of gem you will want to slot into your Ice Gauntlet is heavily dependent upon your build and what you’re trying to accomplish. It’s also going to vary based on PvP vs PvE activities (You can check our quick reference guide for gems for a full list of gems and their effects).

Enemy types the Ice Gauntlet is strong/weak against

Being an Ice Gauntlet the damage type you will be dealing is ice. Our Damage Type vs Mob Types Quick Chart guide as a complete breakdown for every weapon, but for this one you will do the most damage against The Lost.

That Concludes our New World Ice Gauntlet Guide. For more on where to level your Ice Gauntlet, check out our Weapon Leveling Locations. 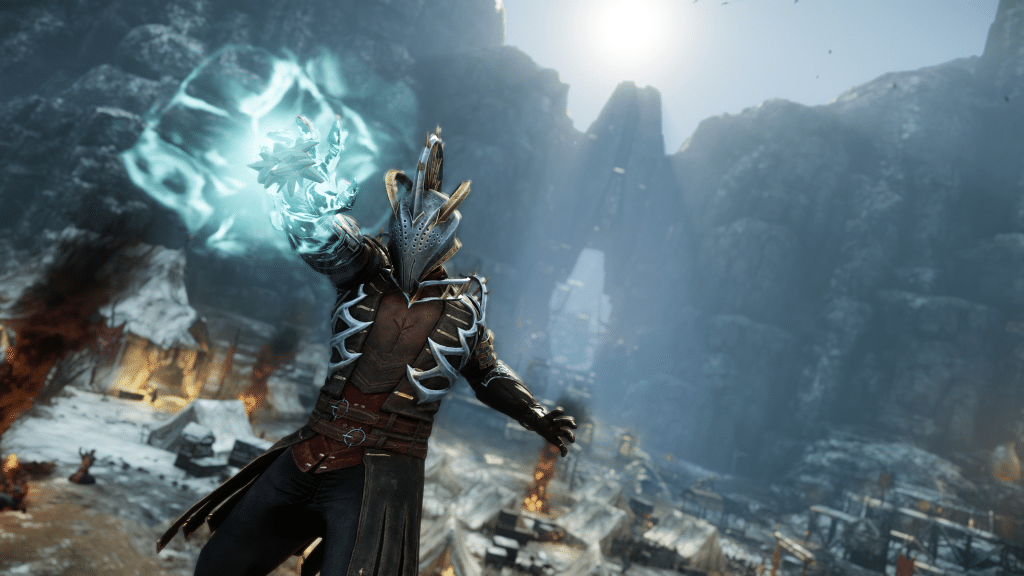 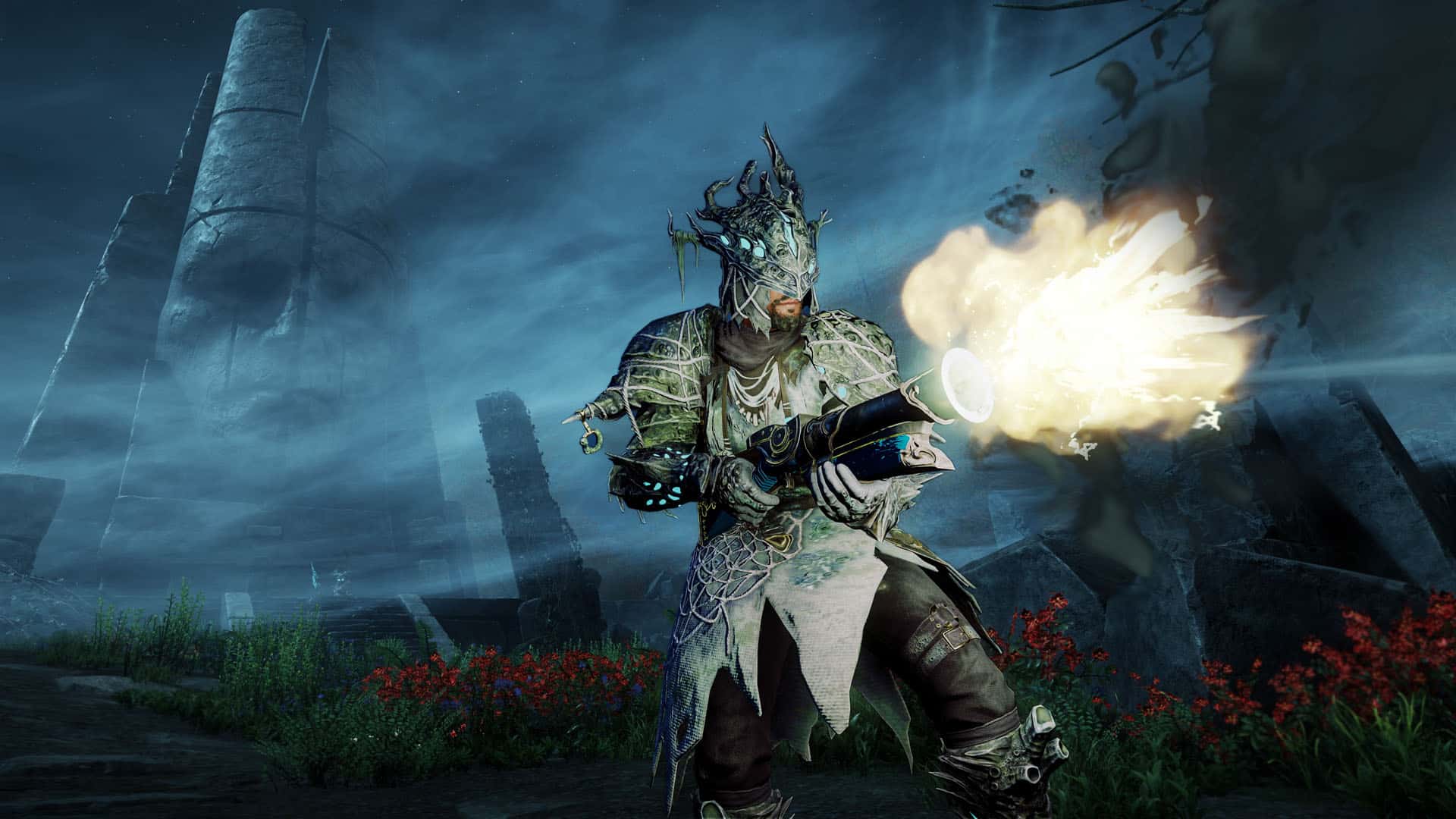