This is a New World Hatchet Spear Build. The primary purpose of this build is PvP. This build is a fast paced playstyle that pumps out tons of damage.

With this build you can burst down squishy targets very quickly and lay down enough pressure on tanky targets to remove them from the fight or outright kill them. It excels at dueling but is mostly melee so you can be kited by mages and other ranged users.

For this build you are going to utilize your hatchet for damage, crowd control breaks, an additional dodge, and self sustain. The recommended active abilities for the hatchet are the following:

Berserk is the staple of your hatchet abilities. You will want to fully upgrade this ability. By doing so you will gain additional speed, self healing, crowd control break upon activation, and uninterruptible attacks. You will want to upgrade Feral Rush to maximum as well. This will provide you with additional damage from the ability and root if you hit your target in the back.

Social distancing is a great ability to get yourself out of gravity wells and help dodge other abilities. You will want to upgrade it once to take advantage of the haste it provides when hitting your a target with an active debuff.

The hatchet has low blocking stability making this an ineffective weapon to block with. Therefore, you will want to forego your block in place of the aimed throw passive. This will provide you with a decent mid range option that can be used to take down fleeing targets. It can also be utilized to deal some poke damage at targets trying to kite you.

You will also want to take the defy death key passive or ultimate. This passive is incredibly strong. You can utilize to bait opponents into being overly aggressive, or get your self out of sticky situations.

For this build you are going to utilize the entire Impaler tree. This is going to allow you to apply consistent damage, rends, weakens, damage over time, and a good stun to set up your other abilities. The recommended active abilities are as follows:

You will want to upgrade all three of the active abilities. This will give you great rend from your perforate, some nice damage over time and increased damage from your skewer, and additional empower, a stun, and some good cooldown reduction from your vault kick.

Exploited weakness will give you even more damage against targets with a debuff. You will have multiple debuffs on your targets at a time with your other spear abilities allowing you to deal tons of damage to your target.

For this build you are going to go split stat:

Both your spear and hatchet are dual stat weapons. You will be dealing most of your damage with your spear for this build so pushing your dexterity to the 250 mark will help you dish out tons of damage with the spear.

There’s also some much needed attribute bonuses from those thresholds. You will be running fortifying perforate, have berserk, and defy death so a lot of constitution is not not needed. You are trying to burst you opponent down quickly so you want higher damage. However, if you’re having issues surviving take 50 from strength and put 50 into constitution.

In this section of the Build, we will break down what equipment you will use. This includes armor perks, weapon perks, and equip weight.

Obtaining best in slot gear can is very difficult. The below recommendations are what you should shoot for, however, if you’re just getting started with the build you would want 5 piece resilient and the necessary perks of fortifying perforate and keen vault kick.

This will allow you to be competitive as you progress into better gear.

Most of the armor you need to run this build will be obtained through crafting or random drops. Below are the recommended perks for your setup:

Berserk has a fairly long cooldown. You will want your berserk available as much as possible to break CC. For this reason, refreshing is an excellent perk to have on your armor for this build. The CC break of berserk is is also why freedom is forgone on this build in favor of refreshing.

There are a few weapons you can farm versus crafting that work great with this build.

For your hatchet the following are all great options listed in order:

(2) The Tiger’s Instinct – Dropped from Borvarn

(2) Dreadwake – Farmed from the Dynasty Shipyard Expedition (mutated version only)

(3) Driftwood – Farmed from the Barnacles and Black Powder Expedition.

There are also some great farmable options for your spear.

Amulet – Shirking Empower, Divine, Health A good alternate option that is farmable is the Blessing of Forefathers Amulet. It can be farmed from the Depths mutation.

Ring – For your ring, you would ideally want Mortal Empowerment, Slash Damage, and Hearty.

However, if you can’t get your hands on one then you can farm out Smooth Bone Ring from the Caretaker in Garden of Genesis or the Featherweight Ring from the Lazarus Instrumentality.

Earring – For your earring, you can farm out the Doom’s Chance from the Lazarus Instrumentality Expedition.

The types of gems you will depend upon the PvP meta. If in doubt, Onyx in your armor is the best choice since physical damage is the most prevalent damage type in New World.

For your weapons you will want to slot an opal in both. You will be dodging quite a lot so the opal will enhance your damage output.

For you runeglass gems you would want to utilize the punishing variant to deal additional damage with your melee attacks.

The heartgem rune of choice for this build is the Cunning Heartrune of Detonate. You can activate the heartrune and gain empowerment. This will allow you to start your combo with a lot of increased damage and then gain additional burst on the explosion of the detonate rune.

You’ll want to utilize the following consumables for this build:

Along with a stat food depending on your attribute distribution from your gear. You can check a full list of consumables by checking out our consumables guide.

How to Use the Build

This build is a very fast pace playstyle. You will be utilizing your spear for most of your damage, and your hatchet will be utilized for self sustain, CC breaking, and your defy death ability.

This build will critical hit a lot which will trigger some empower bonuses for you. For example, if your skewer critical hits you will gain increased damage for 10 seconds. Your procs are important to think about when utilizing the abilities on your opponents.

You want to open the fight with skewer because it will deal increased damage to your an opponent with full health with, proc the empowerment buff if you critical hit, and proc your bleed. You want to continue to apply as much pressure as possible to your opponent with light spear attacks. They do quite a lot of damage and you will slow your target if you land 2 in a row.

If you can land a vault kick on an enemy below 50% health you will also gain a nice empowerment buff. Remember that if you switch weapons this buff falls off. So, while you have it active you want to deal as much damage as possible with your spear.

If you get pressured or counter CC’d you can switch over to your hatchet and berserk out of the CC. You can also apply consistent damage with your light attacks from the hatchet and some good damage to finish off opponents with your feral rush. The feral rush ability can also serve as a nice setup to a spear combo if you land one on the back of your opponent.

If you land a feral rush root, it’s a great time to land a perforate to rend, into a vault kick then skewer. 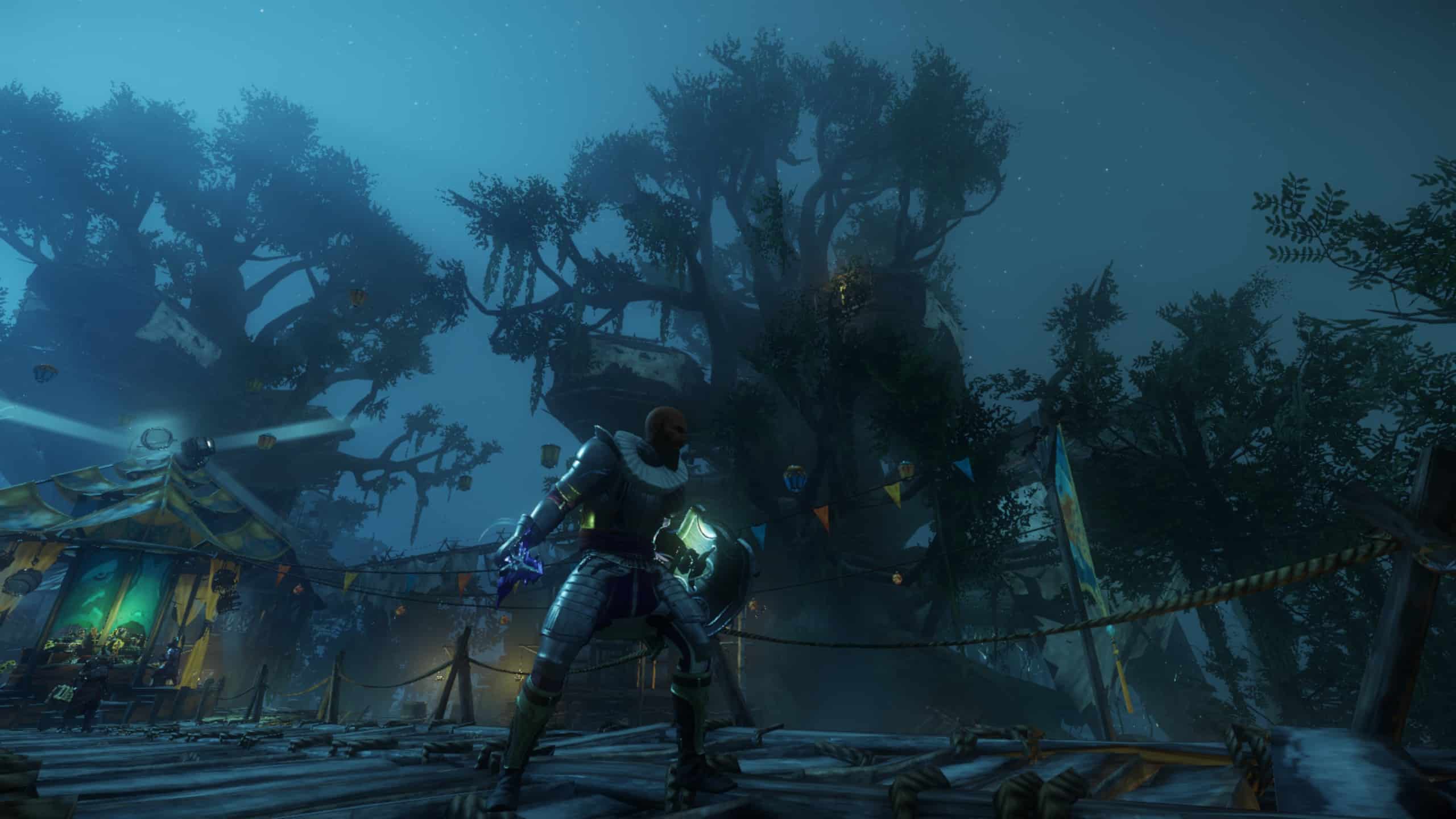 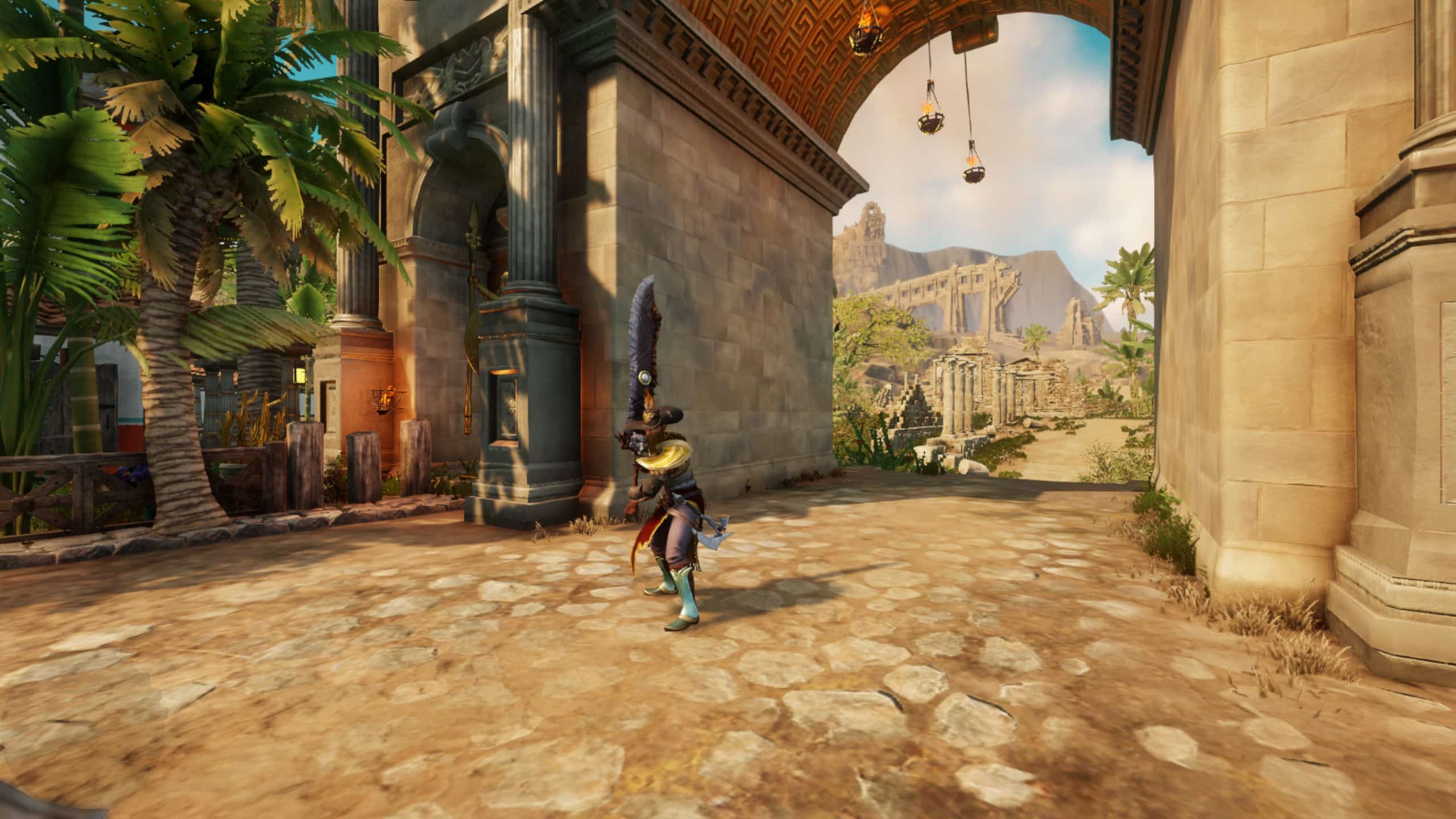